Preserving the Past and Adapting to the Future in Lafayette, Louisiana

Significant floods impacted southern Louisiana in 2016, prompting efforts from federal, state, and local governments aimed at both recovering from the floods and ensuring resiliency against future disasters. In the city of Lafayette, one affordable housing project, Bottle Art Lofts, combines emerging best practices in flood-resistant building with neighborhood revitalization and historic preservation to create 105 units of housing in a former Coca-Cola Company bottling plant. Developer HRI Communities completed the project over two phases with a total development budget of approximately $32 million. Through a leasing preference for tenants working in the arts or other creative fields, Bottle Art Lofts is helping support local culture in Lafayette.

The first phase of the Bottle Art Lofts, completed in 2021, involved the rehabilitation and reuse of the Coca-Cola bottling facility, originally built in 1936. A combination of state and federal historic tax credits, low-income housing tax credits (LIHTCs), and Community Development Block Grant Disaster Recovery (CDBG-DR) program funds supported the construction of 35 one-bedroom and 5 two-bedroom units, including 2 units set aside as permanent supportive housing. The permanent supportive housing units are restricted to those earning less than 20 percent of the area median income (AMI), and the remaining units are restricted to tenants earning 50 or 60 percent of AMI. 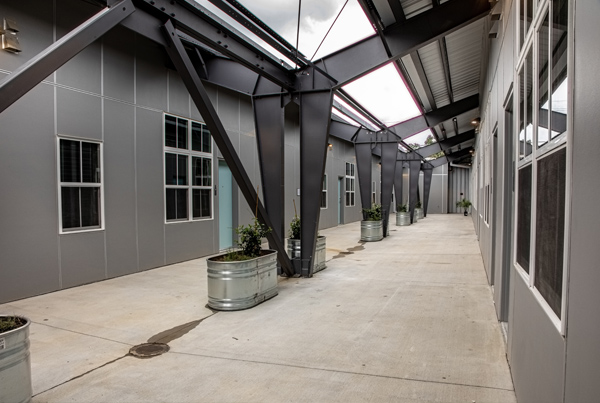 Bottle Art Lofts gives preference to tenants working in creative fields, including visual artists, musicians, and food industry workers. Josh Collen, president of HRI Communities, reports that Lafayette’s strong creative culture primes Bottle Art Lofts residents for future success. In similar HRI Communities projects, many residents working in creative industries eventually move out of their affordable rental units because they have been able to save for a downpayment on a house, says Collen.

The development supports artists by providing gallery space for residents to display their work, community space that enables artists to teach, and a computer lab where residents can create digital portfolios and market their artwork. The project also features a fitness center, a picnic area, and a garden for residents’ use.

A Gateway Into Lafayette

The Bottle Art Lofts are also helping to reestablish the Four Corners neighborhood of Lafayette as a gateway into the city. Once home to restaurants, a theater, and small local businesses, significant displacement because of the widening of U.S. Highway 90 led to neighborhood decline. In the 1970s, Coca-Cola relocated its bottling functions, and the plant sat abandoned. In 2014, the city adopted PlanLafayette, and in 2018, a study into the University Avenue Corridor laid the groundwork for revitalizing the neighborhood.

Following the 2016 floods (and a series of devastating hurricanes), the state of Louisiana established the Piggyback Resilience Initiative Mixed Income (PRIME) program to direct federal CDBG-DR funding toward mixed-income, multifamily housing projects that “incorporate resilient construction practices that use materials and techniques that increase a structure’s ability to withstand adverse weather conditions.” 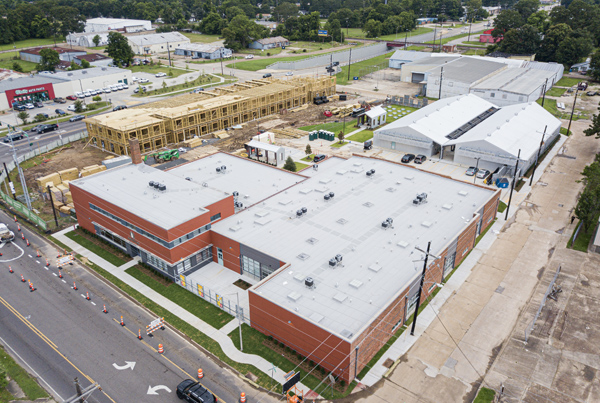 The funding, which is structured as loans, targets areas of the state significantly affected by the 2016 floods. Collen credits the program with establishing a sustainable method of funding the construction of buildings capable of withstanding severe weather events. Operating income generated by the funded projects is reinvested into PRIME and is then available to fund future projects.

In addition to state funding efforts, the development of resiliency standards has provided needed benchmarks and guidance for developers wanting to increase the resiliency of their projects. According to Collen, many existing resiliency standards were neither adapted for nor well-suited to multifamily construction. In early 2022, the Insurance Institute for Business & Home Safety expanded its FORTIFIED program to include beyond-code standards for resilient multifamily housing, and Bottle Art Lofts was the first project to receive Gold-level certification under the expanded projects.

To aid the development of severe-weather-tolerant buildings, Enterprise Green Communities created standards that define “design for resiliency,” which requires, among other things, stormwater management capacity. Despite being located on a site outside of the 500-year floodplain, Bottle Art Lofts incorporates these standards. The reason, says Collen, is that despite being relatively safe from flooding, Bottle Art Lofts must not overburden municipal water management infrastructure by shedding heavy rainwater too quickly.

Rooted in Lafayette’s history, Bottle Art Lofts is playing an active role in protecting the city’s future. It provides an affordable and professionally supportive home for the city’s artists, contributes to the neighborhood’s renewal, and is a leader in demonstrating how emerging policy and building standards can sustain communities vulnerable to climate change.